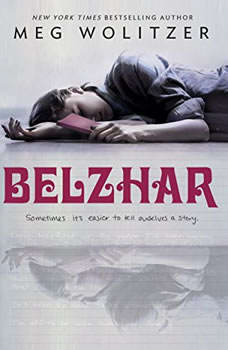 If life were fair, Jam Gallahue would still be at home in New Jersey with her sweet British boyfriend, Reeve Maxfield. She’d be watching old comedy sketches with him. She’d be kissing him in the library stacks.

She certainly wouldn’t be at The Wooden Barn, a therapeutic boarding school in rural Vermont, living with a weird roommate, and signed up for an exclusive, mysterious class called Special Topics in English.

But life isn’t fair, and Reeve Maxfield is dead.

Until a journal-writing assignment leads Jam to Belzhar, where the untainted past is restored, and Jam can feel Reeve’s arms around her once again. But there are hidden truths on Jam’s path to reclaim her loss.

Holding Up the Universe
by Jennifer Niven

American author, Meg Worlitzer, has been the first author to participate in a coast to coast book club discussion via Skype. That would seem to be a great way to promote her work most advantageously. The work discussed was The Uncoupling. Meg was born in 1959 in Brooklyn, New York. Her mother was also a novelist and her dad, a psychologist. She graduated from Smith College and Brown University in creative writing. Her first writing was accomplished during undergrad, entitled, Sleepwalking, a tale of three college girls who were obsessed with poetry and death, and was published in 1982.

Her novels include: The Interestings, The Uncoupling, The Year Nap, The Position, The Wife, and Sleepwalking. These were all on the New York Times-bestselling list. She also co-authored a cryptic crossword book, and has taught creative writing in several important venues. Three films have evolved from her writings, including This Is Your Life, scripted and directed by Nora Ephron.