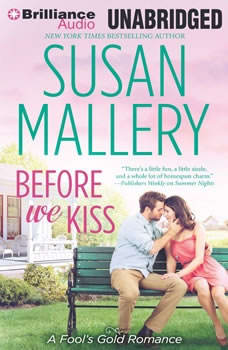 New York Times bestselling sensation Susan Mallery returns to Fool's Gold, California, where it's true that sometimes you have to kiss a few frogs… Former pro-football kicker Sam Ridge has notoriously bad luck with women—from cheaters to fame chasers. Still, the gorgeous brunette at the bar in Fool's Gold looks harmless—until she takes him home and he discovers a room devoted to securing a man, for life. Dellina Hopkins never guessed that storing gowns from a friend's bridal boutique would chase away her first and only fling. After her parents died, she skipped her "wild youth" to raise her sisters. She doesn't want forever from Sam, but one night—all night—would've been nice.His clean getaway gets messy when his firm hires Dellina to plan an event. As long hours lead to late nights, the two succumb to temptation again. Has Sam's luck finally changed? Or this time, will Dellina be the one to run?

#1 New York Times bestselling author Sherryl Woods reunites a mother and daughter and demonstrates that real love knows no limitsCallie Smith’s quest for success far from her Iowa roots has caused a rift with her hardworking family. And with n...

Before We Kiss
Fool's Gold Series