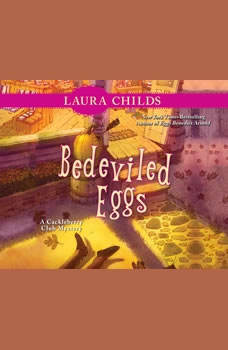 After losing their husbands, Suzanne, Toni, and Petra bonded, gaining newfound independence as well as a wealth of support, inspiration, home-baked goods, and their own business. But who would have dreamed that when the Cackleberry Club Caf opened its doors, the three women would be serving justice to criminals? Getting ready for Halloween, the ladies at the Cackleberry Club Caf are busy carving jack-o'-lanterns, stocking up on candy, and baking pumpkin bread. But someone's jumped the gun on the tricks. As mayoral candidate Chuck Peebler leaves the caf, he gets struck with a crossbow arrow and is killed instantly. When another murder occurs on the historical society's Quilt Trail, there's no disguising ita murderer is running loose in the town of Kindred. Now Suzanne's on the beat to sniff out one bag egg.

The Darling Dahlias and the Cucumber Tree
by Susan Wittig Albert

Nominated for both the Agatha and Anthony awards, national best-selling author Susan Wittig Albert introduces a garden club of lady sleuths in Depression-era Alabama. The Darling Dahlias have just inherited a new clubhouse and garden, complete with ...

Sprinkle with Murder
by Jenn McKinlay

Melanie Cooper and Angie DeLaura are finally living out their dream as the proud owners of the Fairy Tale Cupcakes bakery. But their first big client is a nightmare. She's a bridezilla who wants 500 custom cupcakes for her wedding. When Mel stumb...

Grace Under Pressure
by Julie Hyzy

Everyone wants a piece of millionaire Bennett Marshfield, owner of Marshfield Manor, but now it's up to new curator Grace Wheaton and handsome groundskeeper Jack Embers to protect dear old Marshfield. But to do this, they'll have to investigate a bo...

Murder Runs in the Family
by Anne George

Anne George’s novels offer a delightful mix of gentle comedy and compelling mystery. Murder Runs in the Family finds two feisty 60-something sisters doing a little amateur sleuthing into the death of a visiting genealogist. Mary Alice has spar...