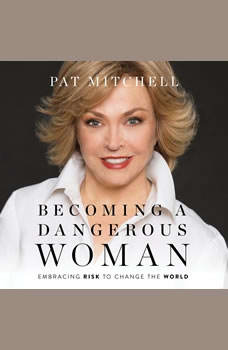 Becoming a Dangerous Woman: Embracing Risk to Change the World

An intimate and inspiring memoir and call to action from Pat Mitchell -- groundbreaking media icon, global advocate for women's rights, and co-founder and curator of TEDWomen Pat Mitchell is a serial ceiling smasher. The first woman to own and host a nationally syndicated daily talk show, and the first female president of CNN productions and PBS, Mitchell has been lauded as a powerful changemaker and a relentless advocate for women and girls.In Becoming a Dangerous Woman, Mitchell shares her own path to power, from a childhood spent on a cotton farm in the South to her unprecedented rise in media and global affairs. Full of intimate, fascinating stories, such as an encounter with Fidel Castro while wearing a swimsuit, and traveling to war zones with Eve Ensler and Glenn, Becoming a Dangerous Woman is an inspiring call to arms for women who are ready to dismantle the barriers they see in their own lives.