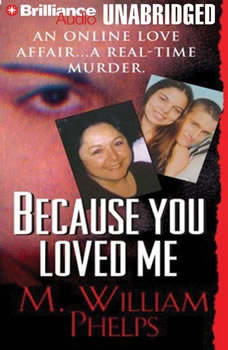 Because You Loved Me

A LIFE TAKENJeanne Dominico’s fiancé found her body on her kitchen floor. More than forty stab wounds and blows to her head with a blunt instrument had cut her life short. What monster had struck in the heart of a peaceful New England town?A TRUST BETRAYEDJeanne was a hard-working single mother. Nicole, her fourteen-year-old daughter was on the honor-roll and head over heels in love—with an eighteen-year-old man she’d known only through the Internet. Once the lovers met in person, Jeanne’s motherly instincts sensed trouble. If only she’d known that the life in danger was her own.IN THE NAME OF LOVEWith a history of psychological trouble and family misfortune, Billy Sullivan’s obsessive and controlling power over Nicole contributed to the brutal slaying of her mother. But it was Nicole’s stunning confession and guilty plea that led to Billy’s sensational trial, where a sordid tale of love, loss, betrayal, and murder finally took a cold-blooded killer offline—and on line for justice.“Phelps is a first-rate investigator.” —Dr. Michael M. Baden