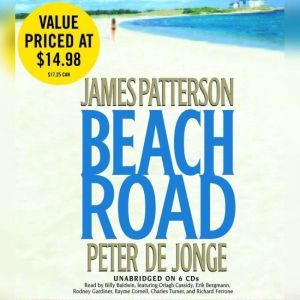 Tom Dunleavy has a one-man law firm in America's wealthiest resort town: legendary East Hampton. But his job barely keeps him in paper clips. His clients make a living serving the rich. The billionaires and celebrities swarming the beaches already have lawyers on their payroll.Very ExpensiveThen a friend of Tom's is arrested for a triple murder near a movie star's mansion. Tom knows in his gut that Dante Halleyville is innocent. Dante asks him to represent him in what could be the Trial of the Century.Very ExclusiveTom recruits Manhattan superlawyer Kate Costello to help. She's a tough hire, because Kate is his ex-girlfriend, but she agrees. In their search to find who really executed three locals, Tom orchestrates a series of revelations to expose the killer, and what emerges is staggering.Very ExplosiveThe final scenes of this audiobook unveil a truth that will leave readers gasping in shock. Written with the precision that has made James Patterson "a master of his genre" (USA Today), Beach Road is his wildest, most thrilling novel ever.

I really like the way that this book was narrated. Once again, James Patterson throws in a really surprising twist at the end. I did NOT see this one coming! Loved it!

I am a huge fan of James Patterson. This has to be his best. I've never read a book with the suspense this one has. It has a great ending. The BEST!!

Beach Road was a great book. I hated that one of the main characters ended up being the killer, but it was still a good shocker at the end. Would recommend this read to anyone.