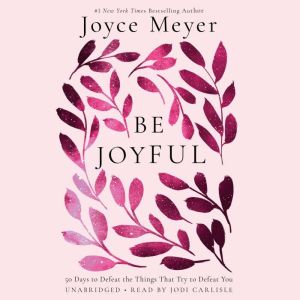 Be Joyful: 50 Days to Defeat the Things that Try to Defeat You

Conquer the most common obstacles to living a joy-filled life!

In this 50-day guide, #1 New York Times bestselling author Joyce Meyer draws upon the teachings of the apostle Paul to help you experience joy-filled living each day of your life.

Joy is not just a "happy feeling" based on circumstances or on things you possess—it is a fruit of the Holy Spirit that empowers you to remain stable and persevere through hard times so you rise above them, rather than becoming defeated by them. One of the hallmarks of Paul’s epistles is the joy with which he writes and which he invites his readers to experience also. He chose joy in all circumstances, even during times of struggle.

In this unique book, Joyce Meyer presents Paul’s teachings on joy into concise lessons that equip you to triumph over the greatest challenges to a joy-filled life. Through these 50 daily entries, you’ll be encouraged to embrace the truths God has given you, truths that will allow you to overcome the emotions, attitudes, and experiences that rob you of joy. Be Joyful in the journey and begin to experience the wonderful, abundant life that the Lord has in store for you!