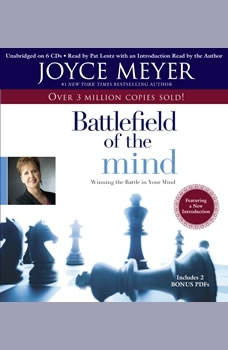 In celebration of selling 3 million copies, FaithWords published a special updated edition of BATTLEFIELD OF THE MIND. Worry, doubt, confusion, depression, anger and feelings of condemnation: all these are attacks on the mind. If readers suffer from negative thoughts, they can take heart! Joyce Meyer has helped millions win these all-important battles. In her most popular bestseller ever, the beloved author and minister shows readers how to change their lives by changing their minds. She teaches how to deal with thousands of thoughts that people think every day and how to focus the mind the way God thinks. And she shares the trials, tragedies, and ultimate victories from her own marriage, family, and ministry that led her to wondrous, life-transforming truth--and reveals her thoughts and feelings every step of the way.This special updated edition includes an additional introduction and updated content throughout the book.