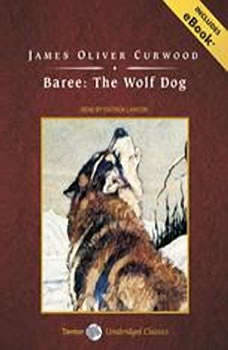 Baree, the son of a grey wolf and a black dog, was born in the vast Canadian wilderness. He learns about nature and his fellow animals by trial and error—fighting with owls and playing with beavers. Being alone in the wild, he desperately seeks to join a pack of wolves, but they see him as a dog, and he is driven away. If the wolves are treacherous, Baree soon learns that humans are worse. He is shot, beaten, and trapped, but he soon learns to take care of himself. After fighting alone against the world, Baree befriends an indian maiden, Nepeese, and he finds his purpose in life.

Part wolf, part Husky, he was born to the wilderness and carried his burden among men stoically. He had known starvation, bitter cold, overwork and suffering at the cruel hand of man. He was a giant among his kind and as fearless as the men who drov...

God's Country and the Woman
by James Oliver Curwood

After two hellish years on the rim of the Arctic, Philip Weyman stumbles back toward civilization, half-starved and half-crazy. He stumbles onto Josephine Adare, a beautiful woman living alone in the wilderness. She asks for his help, I need you to ...

The starved wolf-pack was hot on his trail. It was the biggest pack that Wabi had ever seen. He calculated there were at least fifty animals in it, possibly even more. Nearer and nearer they came, until the first were scarcely two hundred feet away....