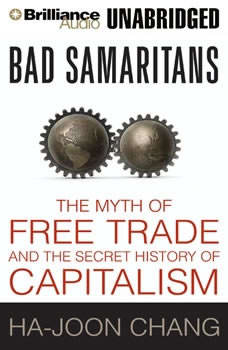 Bad Samaritans: The Myth of Free Trade and the Secret History of Capitalism

With irreverent wit, an engagingly personal style, and a battery of real-life examples, Ha-Joon Chang blasts holes in the “World Is Flat” orthodoxy of Thomas Friedman and other neo-liberal economists who argue that only unfettered capitalism and wide-open international trade can lift struggling nations out of poverty. On the contrary, Chang shows, today’s economic superpowers—from the United States to Britain to his native South Korea—all attained prosperity by shameless protectionism and government intervention in industry. We in the wealthy nations have conveniently forgotten this fact, telling ourselves a fairy tale about the magic of free trade and—via our proxies such as the World Bank, International Monetary Fund, and World Trade Organization—ramming policies that suit ourselves down the throat of the developing world.Unlike typical economists who construct models of how economies are supposed to behave, Chang examines the past: what has actually happened. His pungently contrarian history demolishes one pillar after another of free-market mythology. We treat patents and copyrights as sacrosanct—but developed our own industries by studiously copying others’ technologies. We insist that centrally planned economies stifle growth—but many developing countries had higher GDP growth before they were pressured into deregulating their economies. Both justice and common sense, Chang argues, demand that we reevaluate the policies we force on weaker nations. Bad Samaritans calls on America to return to its abandoned role, embodied in programs like the Marshall Plan, to offer a helping hand, instead of a closed fist, to countries struggling to follow in our footsteps.

Chang's socialism calls for central planning and the abolishment of capitalism and free trade. Isn't North Korea an example of why not to do this?