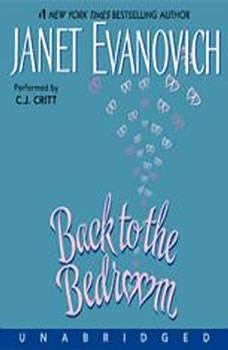 Back to the Bedroom

She was the mysterious woman in the long black cloak. He was the sexy guy next door. They shared a common wall between their Capitol Hill townhouses and not much else ... until disaster scored a direct hit on the mystery woman's bedroom and the sexy guy's heart. He baked her a cake, she learned to throw a football, there were some misunderstandings in the living room, some mishaps in the yard, and some romantic moments everywhere.Performed by C.J. Critt

Of all the Evanovich titles I've read, this one had to be the most unsatisfying. I didn't like the heroine enough to care about what happened to or for her. I did like her roomate, (Evanovich always does exceptionally well with older characters), but she wasn't the main character. The romantic interest's character was really never developed like other Evanovich characters. Evanovich didn't even do her homework in terms of the area in DC she was writing about. I live there, I know! I was just.....Disappointed.