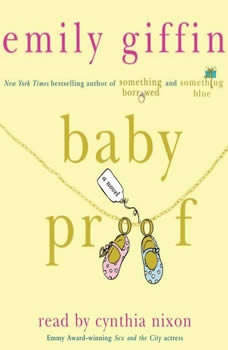 Baby ProofEmily Griffin From the author of the smash hits Something Borrowed and Something Blue comes an audio novel that explores the question: is there ever a deal-breaker when it comes to true love? First comes love. Then comes marriage. Then comes . . . a baby carriage? Isn't that what all women want? Not so for Claudia Parr. And just as she gives up on finding a man who feels the same way, she meets warm, wonderful Ben. Things seem too good to be true when they fall in love and agree to buck tradition with a satisfying, child-free marriage. Then the unexpected occurs: one of them has a change of heart. One of them wants children after all. This is the witty, heartfelt story about what happens to the perfect couple when they suddenly want different things. It's about feeling that your life is set and then realizing that nothing is as you thought it was--and that there is no possible compromise. It's about deciding what is most important in life, and taking chances to get it. But most of all, it's about the things we will do--and won't do--for love.

I rented this with a few misgivings after reading the review in Audio File. Unfortunately, Audio File was too kind. The book is totally predictable and an example of the chic lit genre at its worst. It is memorable however for Cynthia Nixon's excellent narration. She manages several voices with ease and yet she does not seem to be jumping up and down yelling 'look at me, I'm doing different voices' which some readers can do.

This isn't the best Emily Giffin book out there (Something Borrowed and Something Blue are much better), but it's still an enjoyable read. This will strike a chord with all professional women out there that are apprehensive about the idea of having a baby. I had so much anxiety while reading this book that I had to flip to the end to see what happens (trust me, I never do this). But overall a good book, but didn't find the same connection with the characters as her other books.