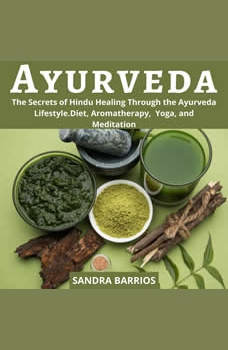 Ayurveda: The Secrets of Hindu Healing Through the Ayurveda Lifestyle. Diet, Aromatherapy, Yoga, and Meditation

Ayurveda is the traditional, ancient Indian system of health science. Understood to be the oldest and most holistic medical system in the world, Ayurveda was developed around 3,000 BCE. The wisdom of this healing method was passed down through ancient Indian spiritual texts, called the "Vedas." There are four major Vedas, each of which describes, in some parts, the principles of health, disease, and treatment.One of these texts, the "Rig Veda" (also known as "Rik Veda" or "Rigveda"), is one of the oldest known books of any Indo-European language.The Rig Veda contains philosophical verses on the nature of existence, as well as information on the three basic human constitutions.It discusses the use of herbs to heal the mind and body, and to keep oneself young. Another Veda, the "Atharva Veda," contains information on everything from internal medicine and surgery, to infertility and psychiatry. The "physicians" at the time of the Vedas were "rishis" — sages or seers, holy people — who viewed health as an overall integration between mind, body, and spirit.Knowledge of Ayurveda spread from India, influencing other ancient systems, including Chinese medicine and the ancient Greek medicine practiced by Hippocrates.Because of its influence, Ayurveda is known as the "Mother of all healing." Here it is what you will find inside: What is Ayurveda? Ayurvedic Meditation Ayurveda and Yoga Ayurveda Medicine – What it is Ayurvedic Lifestyle Ayurvedic Diet – What to Eat and the Effects of an Ayurvedic Diet Ayurvedic Herbs, Herbal Medicine and Health Benefits Aromatherapy and Ayurveda This book covers all these, and much more. So what are you waiting for? Scroll up, click on "Buy Now with 1-Click."×ayurveda×self healing×ayurvedic principles×ayurvedic diet×meditation×yoga×indian healing×hindu healing×rituals

The 22-Day Revolution
by Marco Borges

The End of Heart Disease
by Dr. Joel Fuhrman