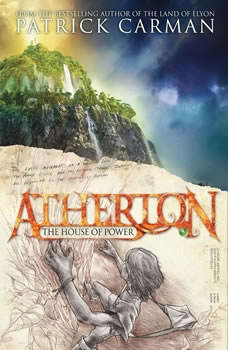 Atherton #1: The House of Power

From the creator of the Land of Elyon comes a riveting adventure set in an extraordinary satellite world?created as a refuge from a dying Earth?that begins to collapse and forever change the lives of its inhabitants. Edgar, a gifted climber, is a lonely boy scaling the perilous cliffs that separate the three realms of Atherton: a humble fig grove; a mysterious highland world of untold beauty and sinister secrets; and a vast wasteland where he must confront an unspeakable danger that could destroy the people of Atherton. When Edgar discovers a book which contains the history of Atherton's origins and ultimate apocalypse, his world?quite literally?begins to turn inside out.