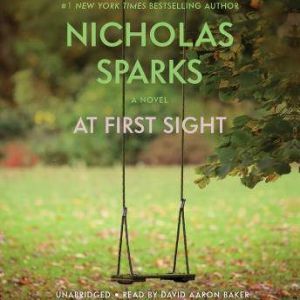 From the world's most beloved chronicler of the heart comes this astonishing story of everlasting love. Here, endings bring new beginnings and tragedies lead to unexpected joy, as the tale begun in True Believer continues...AT FIRST SIGHT There are a few things Jeremy Marsh was sure he'd never do: He'd never leave New York City; never give his heart away after barely surviving one failed marriage; and never become a parent.Now Jeremy is living in the tiny town of Boone Creek, North Carolina, engaged to Lexie Darnell, the love of his life, and anticipating the start of their family. But just as everything seems to be settling into a blissful pattern, a mysterious e-mail sets off a chain of events that will test the strength of their commitment. Capturing all the heartbreak, tension, and romance of the newly wed, AT FIRST SIGHT explores the love between a man and a woman and between a parent and a child-and reveals an extraordinary truth: that the emotion that can break your heart is sometimes the very one that heals it...

I love Nicholas Sparks but I already know what is going to happen in every story he writes! Everyone will die! It just gets so old! I didn't even read his newest one because I know the ending already. Can't he write at least two stories where someone can stay together! No more Sparks for me!

I didn't find this story to be particularly interesting. Overall, the pace was slow. I skipped through several sections that felt like it served no purpose other than dragging out the story. I never felt the emotion in this story that I have experienced by other works by this author.