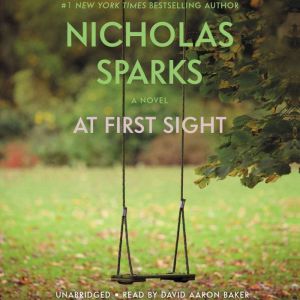 At First Sight: Booktrack Edition adds an immersive musical soundtrack to your audiobook listening experience! * The poignant follow-up to True Believer, a young couple's love faces the ultimate test in this #1 New York Times bestseller.There are a few things Jeremy Marsh was sure he'd never do: he'd never leave New York City; never give his heart away again after barely surviving one failed marriage; and, most of all, never become a parent. Now, Jeremy is living in the tiny town of Boone Creek, North Carolina, married to Lexie Darnell, the love of his life, and anticipating the birth of their daughter. But just as his life seems to be settling into a blissful pattern, an unsettling and mysterious message re-opens old wounds and sets off a chain of events that will forever change the course of this young couple's marriage.Dramatic, heartbreaking and surprising, this is a story about the love between a man and a woman and between a parent and a child. While the novel picks up the tale of Lexie Darnell and Jeremy Marsh that started in True Believer and will delight fans of that novel, it stands on its own as one of Nicholas Sparks's most deeply moving love stories. *Booktrack is an immersive format that pairs traditional audiobook narration to complementary music. The tempo and rhythm of the score are in perfect harmony with the action and characters throughout the audiobook. Gently playing in the background, the music never overpowers or distracts from the narration, so listeners can enjoy every minute. When you purchase this Booktrack edition, you receive the exact narration as the traditional audiobook available, with the addition of music throughout.