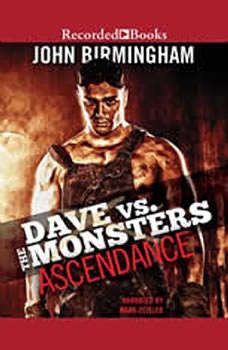 John Birmingham is the master of alternate history adventure-- and now he's mastered a new genre with the volcanically fast-paced and wildly inventive Dave Hooper urban fantasy series. The series is anchored by a thrilling high concept: An oil rig opens a rift deep in the ocean that unleashes terrifying monsters into the world. But perhaps its coolest asset is its hero, Dave Hooper, a tough, bleakly funny, down-on-his luck oil rig worker with an unlikely destiny as a monster-slayer and world savior. With a memorable concept and an unforgettable new hero, the Dave Hooper series will satisfy Birmingham's large fanbase and convert a new legion of devoted fans. Birmingham, whose book LEVIATHAN won the National Award for Nonfiction at the Adelaide Festival of the Arts 2002, "tells stories for a living." He has written for the Sydney Morning Herald, Rolling Stone, Penthouse, Playboy, and numerous other magazines. His earlier works, in addition to the Axis of Time series (WEAPONS OF CHOICE, DESIGNATED TARGETS, and FINAL IMPACT), include HE DIED WITH A FELAFEL IN HIS HAND, made into a feature film by Noah Taylor, THE TASMANIAN BABES FIASCO, HOW TO BE A MAN, and THE SEARCH FOR SAVAGE HENRY.