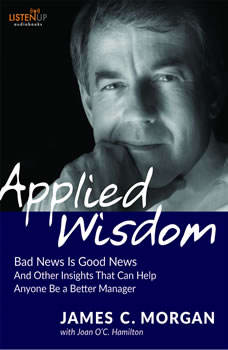 Applied Wisdom: Bad News Is Good News and Other Insights That Can Help Anyone Be a Better Manager

Success in business demands the effective management of people. James C. Morgan, who for nearly three decades led the high-tech powerhouse Applied Materials Inc. to both financial success and to the designation as one of America’s most admired companies and best places to work, provides a simple, straightforward set of principles and tips that he says can help anyone be a better manager. Applied Materials is one of Silicon Valley’s great success stories and it helped propel the digital revolution. But Jim Morgan’s management techniques are not reserved for high-tech: Applied Wisdom shows how the same approaches, tools, and values work at any scale, from start-ups to middle management in a global corporation — and even to non-profits. Rich in stories and practical examples, it’s a must-read for those seeking a timeless and proven management manual.