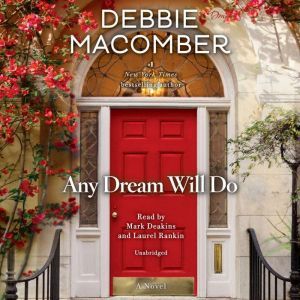 Any Dream Will Do

#1 NEW YORK TIMES BESTSELLER • Debbie Macomber returns with a powerful standalone novel about a woman forced to start her life anew, embarking on the most courageous journey of all—to a place where she learns what love and trust really mean.

Shay Benson adored her younger brother, Caden, and that got her into trouble. When he owed money, Shay realized she would do anything to help him avoid the men who were threatening him, and she crossed lines she never should have crossed. Now, determined to start fresh, she finds herself in search of a place to stay and wanders into a church to escape from the cold.

Pastor Drew Douglas adored his wife. But when he lost her, it was all he could do to focus on his two beautiful kids, and his flock came in a distant third. Now, as he too is thinking about a fresh start, he walks through his sanctuary and finds Shay sitting in a pew.

The pair strike up a friendship—Drew helps Shay get back on her feet, and she reignites his sense of purpose—that, over time, turns into something deeper, something soulful, spiritual, and possibly romantic. Even Drew’s two children are taken with this woman who has brought light back into their lives. Perhaps most important, Shay learns to trust again as she, in turn, proves herself trustworthy to her adopted community.

But Caden’s return to town and a disastrous secret threaten to undo the life Shay has tried so hard to rebuild. It will take the utmost courage and faith if she and Drew hope to find healing and open their hearts to a brighter future.

Praise for Any Dream Will Do

“Emotional, romantic and inspirational, the latest novel from romance maven Macomber is a must read! . . . Shay’s journey is one of courage, and there’s something in her story for every reader.”—RT Book Reviews

“Any Dream Will Do is . . . so realistic, it’s hard to believe it’s fiction through the end. Even then, it’s hard to say goodbye to these characters. This standalone novel will make you hope it becomes a Hallmark movie, or gets a sequel. It’s an inspiring, hard-to-put-down tale. . . . You need to read it.”—The Free-Lance Star

“Any Dream Will Do by Debbie Macomber is a study in human tolerance and friendship. Macomber masterfully shows how all people have value.”—Fresh Fiction

“Macomber never disappoints. The message is uplifting and inspirational. Fans of Christian fiction or crossover works with a positive message will enjoy this book.”—Library Journal