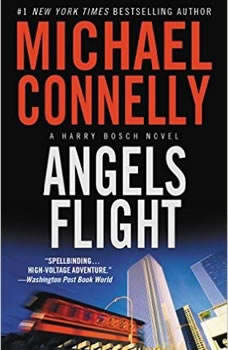 A brand new recording of this Michael Connelly classic - available unabridged from Hachette Audio for the first time ever! An activist attorney is killed in a cute little L.A. trolley called Angels Flight, far from Harry Bosch's Hollywood turf. But the case is so explosive--and the dead man's enemies inside the L.A.P.D. are so numerous--that it falls to Harry to solve it. Now the streets are superheating. Harry's year-old Vegas marriage is unraveling. And the hunt for a killer is leading Harry to another high-profile L.A. murder case, one where every cop had a motive. The question is, did any have the guts?

Homicide detective Hieronymous Harry Bosch is up to his very stiff neck in politics, police corruption and racial tension. When Howard Elias, an African American lawyer famous for suing the LAPD for racially motivated brutality, is shot dead on the short train run up a steep hill in downtown L.A. known as Angels Flight Bosch and his team are ***igned the highly sensitive case. Bosch deals with racial and departmental political hokum, he goes into the case knowing that cops will be among the suspects, plus his new wife has returned to gambling. This book was done after the Rodney King riots in L.A. so racial tensions flow throughout the book which tended to put me on edge while reading this, also one wonders how any crimes get solved if the Los Angels police department is as corrupt as it is portrayed in this book. I enjoyed this book but got real tired of all the constant the city is going to burn mentality as well as the boulder on the shoulder of other charectors