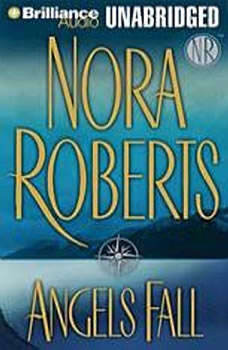 #1 New York Times bestselling author Nora Roberts explores the wilds of the Grand Tetons—and the mysteries of love, murder, and madness—in this engrossing and passionate novel.The sole survivor of a brutal crime back East, Reece Gilmore settles in Angel’s Fall, Wyoming—temporarily, at least—and takes a job at a local diner. One day, while hiking in the mountains, she peers through her binoculars and sees a couple arguing on the bank of the churning Snake River. And suddenly, the man is on top of the woman, his hands around her throat...By the time Reece reaches a gruff loner named Brody farther down the trail, the pair is gone. And when authorities comb the area where she saw the attack, they find no trace that anyone was even there.No one in Angel’s Fall seems to believe Reece—except Brody, despite his seeming impatience and desire to keep her at arm’s length. When a series of menacing events makes it clear that someone wants her out of the way, Reece must put her trust in Brody—and herself—to find out if there is a killer in Angel’s Fall, before it’s too late.

Just what I needed. A real escape. I liked the character and found my-self really caring about what happened next.

This story was sooooooooooooo good. Nora is my favorite author. This book did not dissapoint me. Great story.