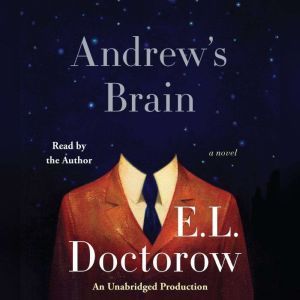 This brilliant novel by an American master, the author of Ragtime, The Book of Daniel, Billy Bathgate, and The March, takes us on a radical trip into the mind of a man who, more than once in his life, has been the inadvertent agent of disaster.

NAMED ONE OF THE BEST BOOKS OF THE YEAR BY ST. LOUIS POST-DISPATCH, SLATE, AND THE TELEGRAPH

Speaking from an unknown place and to an unknown interlocutor, Andrew is thinking, Andrew is talking, Andrew is telling the story of his life, his loves, and the tragedies that have led him to this place and point in time. And as he confesses, peeling back the layers of his strange story, we are led to question what we know about truth and memory, brain and mind, personality and fate, about one another and ourselves. Written with psychological depth and great lyrical precision, this suspenseful and groundbreaking novel delivers a voice for our times—funny, probing, skeptical, mischievous, profound. Andrew’s Brain is a surprising turn and a singular achievement in the canon of a writer whose prose has the power to create its own landscape, and whose great topic, in the words of Don DeLillo, is “the reach of American possibility, in which plain lives take on the cadences of history.”

“Cunning [and] sly . . . This babbling Andrew is a casualty of his times, binding his wounds with thick wrappings of words, ideas, bits of story, whatever his spinning mind can unspool for him. One of the things that makes [Andrew] such a terrific comic creation is that he’s both maddeningly self-delusive and scarily self-aware: He’s a fool, but he’s no innocent.”—The New York Times Book Review

“Dramatic . . . cunning and beautiful . . . strange and oddly fascinating, this book: a musing, a conjecture, a frivolity, a deep interrogatory, a hymn.”—San Francisco Chronicle

“Provocative . . . a story aswirl in a whirlpool of neuroscience, human relations, loss, guilt and recent American history . . . Doctorow reveals his mastery in the sheen of a text that is both window and mirror. Reading his work is akin to soaring in a glider. Buoyed by invisible breath, readers encounter stunning vistas stretching to horizons they’ve never imagined.”—The Plain Dealer

“Andrew’s ruminations can be funny, and his descriptions gorgeous.”—Associated Press

“[An] evocative, suspenseful novel about the deceptive nature of human consciousness.”—More