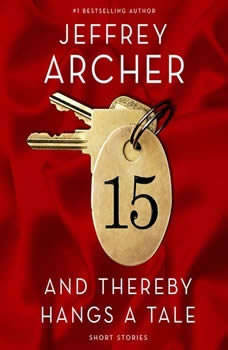 And Thereby Hangs a Tale

International bestselling author Jeffrey Archer has spent the last five years gathering spellbinding stories from around the globe. These fifteen brand-new tales showcase Archer's talent for capturing an unforgettable moment in time, whether tragic, comic, or outrageous.In India, Jamwal and Nisha fall in love while waiting for a traffic light to turn green on the streets of Delhi.From Germany comes "A Good Eye," the tale of a priceless oil painting that has remained in the same family for over two hundred years, until...To the Channel Islands and "Members Only," where a golf ball falls out of a Christmas cracker, and a young man's life will never be the same...To Italy and "No Room at the Inn," where a young man who is trying to book a room at a hotel ends up in bed with the receptionist, unaware that she...To England, where, in "High Heels," a woman has to explain to her husband why a pair of designer shoes couldn't have gone up in flames...Some of these stories will make you laugh while others will bring you to tears but, once again, every one of them will demand that you keep turning the page until you finally discover what happens to this remarkable cast of characters.