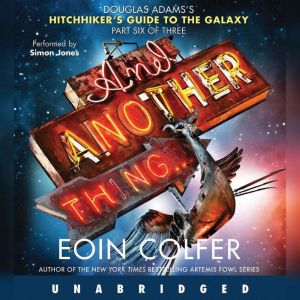 An Englishman's continuing search through space and time for a decent cup of tea . . .Arthur Dent's accidental association with that wholly remarkable book, The Hitchhiker's Guide to the Galaxy, has not been entirely without incident.Arthur has traveled the length, breadth, and depth of known, and unknown, space. He has stumbled forward and backward through time. He has been blown up, reassembled, cruelly imprisoned, horribly released, and colorfully insulted more than is strictly necessary. And of course Arthur Dent has comprehensively failed to grasp the meaning of life, the universe, and everything.Arthur has finally made it home to Earth, but that does not mean he has escaped his fate.Arthur's chances of getting his hands on a decent cuppa have evaporated rapidly, along with all the world's oceans. For no sooner has he touched down on the planet Earth than he finds out that it is about to be blown up . . . again.And Another Thing . . . is the rather unexpected, but very welcome, sixth installment of the Hitchhiker's Guide to the Galaxy series. It features a pantheon of unemployed gods, everyone's favorite renegade Galactic President, a lovestruck green alien, an irritating computer, and at least one very large slab of cheese.

I really wanted to like this book but I can't. I gave it 4 reads and it never got better. Cute for cuteness' sake does not an Adams story make. The Salmon of Doubt as an outline and a collection of essays recovered from multiple hard drives was better organized and more cohesive than this. I know Eoin tried and so did I and we both failed.

And Another Thing... by Eoin Colfer surprised me greatly. I had already had an appreciation for Colfer's writing from listening to a few of his Artemis Fowl stories and I've had a deep and abiding love of the Hitchhiker's Guide to the Galaxy series, but I hadn't expected them to come together nearly as well they did. Colfer does an admirable job of capturing the spirit of the Hitchhiker's Guide without coming across as simply emulating the late Adams's style. Characters are portrayed well, the story fits along with what has come before, and the frequent interludes of exerpts from the Guide are as funny as ever. In several places I found myself laughing aloud with no regard to what the people around me must have thought, the hallmark of any of my experiences listening to the Hitchhiker's Guide. Simon Jones does an excellent job reading and having the voice of Arthur Dent from the radio and television series lends gravitas to the project. I heartily recommend it to fans of the series. Keep a towel handy.