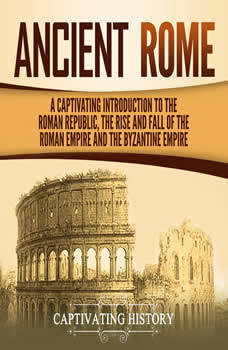 Ancient Rome: A Captivating Introduction to the Roman Republic, the Rise and Fall of the Roman Empire, and the Byzantine Empire

The Roman civilization is probably the single most important civilization in the history of the planet. Its expansion defined Europe. Its constitution shaped societies from Russia in the east to the United States and Latin America in the west. Not even its conquerors were immune to the superior Roman culture.

In this new captivating history book, you'll learn all you need to know about Roman institutions and politics. But our focus will be on the captivating stories and curious personalities of the Roman emperors, politicians, and generals - from Romulus, Caesar, Augustus, Trajan, and Hadrian to Constantine, Justinian, and Belisarius.

Equally important (and perhaps even more interesting) are the stories of influential women - mothers, wives, and lovers, from Cleopatra and Agrippina to Theodora and Zoe with the coal-black eyes - whose schemes often redirected the course of history.

Here are some of the topics covered in Ancient Rome: A Captivating Introduction to the Roman Republic, the Rise and Fall of the Roman Empire, and the Byzantine Empire:

Listen to this audiobook now to learn more about ancient Rome!