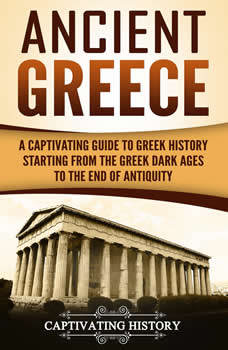 Ancient Greece: A Captivating Guide to Greek History Starting from the Greek Dark Ages to the End of Antiquity

The culture and events of Greece were so influential they have a significant effect on modern-day people all over the world. The ancient Greeks gave birth to democracy, a political system frequently used and considered by some as the best form of government. Great minds from Greece also made incredible and vital discoveries such as the water mill, the basics of geometry and using medicine to cure illness. The ancient Greek philosophers laid the groundwork for a whole new field of thought and study. Ancient Greece offered the foundation of the Olympic games, which still run regularly today. Particularly famous historical figures such as Alexander the Great and Cleopatra also had ties to and roles during Greek history, through the course of wars and empire expansion.

Given the influence of Ancient Greece, as you learn about this time and place, you will learn about your history and the origins of the people, places, and institutions you likely regularly studied in school. Starting in the Dark Ages, this audiobook will take you on a captivating journey through the darkness, democracy, discovery, and development of Western Civilization.

Get the audiobook now and learn more about ancient Greece.

Classical Mythology A to Z
by Annette Giesecke