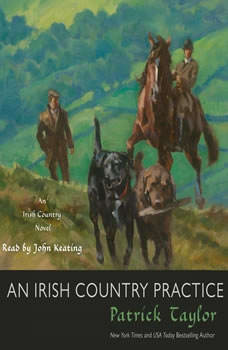 "The charm of Taylor's Irish Country tales is brought to life in John Keating's performance. His Irish lilt will transport listeners straight to Ballybucklebo...Keating's pacing and inflections are perfect as he gives a unique vocal personality to each character." — AudioFile Magazine on An Irish Country Love StoryAn Irish Country Practice is the twelfth heartwarming installment in New York Times and Globe and Mail bestselling author Patrick Taylor's beloved Irish Country series.Once, not too long ago, there was just a single Irish country doctor tending to the lively little village of Ballybucklebo: Doctor Fingal Flahertie O’Reilly. Now his thriving practice is growing by leaps and bounds.Not only has O’Reilly taken a new trainee under his wing, Doctor Connor Nelson, he’s also added a spirited Labrador puppy to his ever-expanding household at Number One Main Street. Meanwhile, his trusted partner, young Doctor Barry Laverty, finds himself wondering if he’s truly ready to settle down and start a family with his lovely fiancee, Sue.As the doctors cope with domestic and professional challenges, they also look after their patients and their ailments, including a mysterious cough, a housewife whose frequent “accidents” may have a disturbing cause, and a respected colleague who might be succumbing to an old vice.All is not sickness and worry, however. There’s plenty of joy and merriment to be found as well, from a visiting circus to racing to sailing . . . and maybe even a happy ending or two.This touching audiobook is as warm and cozy as the lovable town in which it takes place.

Dr. Thea Sperelakis has always been an outsider. She has a brilliant medical mind and a remarkable ability to recall details, but her difficulty in dealing with hidden agendas and interpersonal conflicts has led her to leave the complex, money-drive...

From neuroscientist and New York Times bestselling author of Still Alice comes a powerful and heartbreaking exploration of regret, forgiveness, freedom, and what it means to be alive.An accomplished concert pianist, Richard received standing ovation...

It’s the winter of 1967 and snow is on the ground in the colorful Irish village of Ballybucklebo, but the chilly weather can’t stop love from warming hearts all over the county. Not just the love between a man and woman, as with young do...

Get drawn into a novel of medical suspense that begins with these chilling questions: Who ends up with the blood samples you routinely give for tests? What else are they being used for? Why don’t you know?Take a Deep Breath....From Boston, a d...

Maggie O'Brien, a nurse and medic on a SWAT team, has a thirst for justice, and a chip on her shoulder. She lives in the shadow of her father, a famous (or infamous) cop. Is she more like him than she wants to admit? The question hits home when Magg...