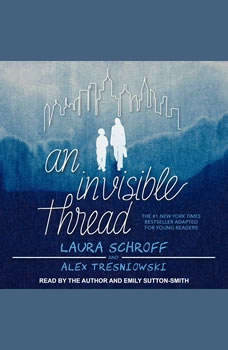 From New York Times bestselling authors Laura Schroff and Alex Tresniowski comes the young listeners' edition of an unbelievable memoir about an unlikely friendship that forever changed the lives of a busy sales executive and a hungry eleven-year-old boy. On one rainy afternoon, on a crowded New York City street corner, eleven-year-old Maurice met Laura. Maurice asked Laura for spare change because he was hungry, and something made Laura stop and ask Maurice if she could take him to lunch. Maurice and Laura went to lunch together, and also bought ice cream cones and played video games. It was the beginning of an unlikely and magical friendship that changed both of their lives forever. An Invisible Thread is the true story of the bond between an eleven-year-old boy and a busy sales executive; a heartwarming journey of hope, kindness, adventure, and love—and the power of fate to help us find our way.

Printz Honor-winner and NEW YORK TIMES bestselling author Carolyn Mackler brings honesty and charm to this middle-grade debut tracing the friendship of two girls. Meet Hannah. Her name is a palindrome. Her birthday is on New Year's. Her mom died w...

A funny, moving, and true story of an ordinary boy with an extraordinary face that's perfect for fans of Wonder—now available in the U.S.   When Robert Hoge was born, he had a tumor the size of a tennis ball in the middle of his face...

The Memory of Light
by Francisco X. Stork

School: failure. Romance: failure. Family: failure. Suicide: failure. This brave and moving novel by the author of Marcelo in the Real World is about the one thing left: living. When Vicky Cruz wakes up in the Lakeview Hospital Mental Disorders war...

In this companion to Openly Straight, Ben confronts pressure at school, repression at home, and his passion for two very different people in figuring out what it takes to be Honestly Ben. Ben Carver is back to normal. He's working steadily in his ...

That’s the Stonewall.The Stonewall Inn.Pay attention.History walks through that door.In 1969 being gay in the United States was a criminal offense. It meant living a closeted life or surviving on the fringes of society. People went to jail, lo...

BE WHO YOU ARE. When people look at George, they think they see a boy. But she knows she's not a boy. She knows she's a girl. George thinks she'll have to keep this a secret forever. Then her teacher announces that their class play is going to be...

Breaking Through
by Francisco Jimenez

As he prepares to recite the Declaration of Independence before his eighth grade social studies class in California, the thing Francisco has feared for ten years finally happens. La migra, the immigration police, come to his classroom and pick him u...

On March 2, 1955, a slim, bespectacled teenager refused to give up her seat to a white woman on a segregated bus in Montgomery, Alabama. Shouting “It’s my constitutional right!” as police dragged her off to jail, Claudette Colvin d...

Save Me a Seat
by Sarah Weeks; Gita Varadarajan

From award-winning author of Pie Sarah Weeks and debut author Gita Varadarajan comes a story that shows us the beautiful ways our lives end up being much more similar than we ever imagine. Two boys -- one white, one Indian American -- gain strengt...