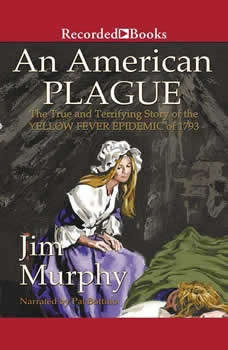 Newbery Honor and Boston Globe/Horn Book Honor recipient Jim Murphy has written numerous stories based on historical events, such as The Boys' War and The Great Fire. In An American Plague, he tells the story of the 1793 yellow fever epidemic. Bizarre medical practices of the time are discussed, as well as popular historical figures, such as George Washington and Benjamin Rush, who were involved in finding a cure for this horrific outbreak. Pat Bottino's captivating narration adds appeal to this interesting historical tale.

Rescue and Jessica
by Jessica Kensky

Based on a real-life partnership, the heartening story of the love and teamwork between a girl and her service dog will illuminate and inspire. Rescue thought he'd grow up to be a Seeing Eye dog - it's the family business, after all. When he gets th...

The Omnivore's Dilemma
by Michael Pollan

In the summer of 1879, the young writer Robert Louis Stevenson received a telegram from America. Fanny, a dear friend in California, was ill. Stevenson packed his bags and left his home in Scotland. When the steamer reached the east coast of America...

Acclaimed author Peg Kehret has written the true story of the year about when she was twelve and stricken with polio. At first paralyzed and terrified, she fought her way to recovery, aided by doctors and therapists, a loving family, supportive room...

“Full of practical advice, helpful explanations, and messages of encouragement…Period.” —Parents.com“Make[s] girls feel both normal and empowered.... If you have a girl nearing puberty in your life, I re...

The Great Fire
by Jim Murphy

The Great Fire of 1871 was one of the most colossal disasters in American history-with damage so profound that few people believed the city of Chicago could ever rise again. By weaving personal accounts of actual survivors together with careful rese...

Our Food
by Grace Lin

Award-winning author Grace Lin joins science writer Ranida T. McKneally to get kids talking about the science of food, the five food groups, and what a healthy meal looks like. Answering questions like "why are so many vegetables green?", "What's th...

“I’ve always loved my body, and now I love it even more because it fits how I feel.” —Jessy“Learn your pronouns because I don’t want to have to slap somebody tonight.” —Christina“Transition? Ever...