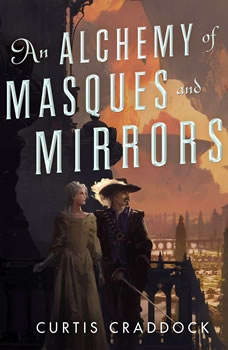 An Alchemy of Masques and Mirrors

A delightful and engrossing fantasy debut featuring an intelligent heroine and her guardian, a royal musketeer.Caelum is an uninhabitable gas giant like Jupiter. High above it are the Risen Kingdoms, occupying flying continents called cratons. Remnants of a shattered world, these vast disks of soaring stone may be a thousand miles across. Suspended by magic, they float in the upper layers of Caelum's clouds. Born with a deformed hand and utter lack of the family's blood magic, Isabelle is despised by her cruel father. She is happy to be neglected so she can secretly pursue her illicit passion for math and science. Then, a surprising offer of an arranged royal marriage blows her life wide open and launches her and Jeane-Claude on an adventure that will take them from the Isle des Zephyrs in l'Empire Celeste to the very different Kingdom of Aragoth, where magic deals not with blood, but with mirrors.“Curtis Craddock's debut is a grand tale of intrigue, adventure, and gaslight fantasy in the tradition of Alexander Dumas.” —Charles Stross

The Sword and Shield
by Emma Khoury

An Alchemy of Masques and Mirrors
The Risen Kingdoms #1

A Labyrinth of Scions and Sorcery
The Risen Kingdoms #2