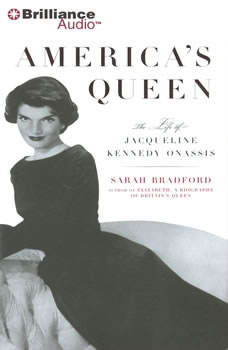 Jacqueline Kennedy Onassis has captivated the American public for more than five decades. From her introduction to the world as "debutante of the year" in 1947 to her untimely death in 1994, she has truly remained America's answer to royalty. In America's Queen, the acclaimed biographer of Queen Elizabeth and Princess Grace reveals the real Jackie in a sympathetic but frank portrait of an amazing woman who has dazzled us for years. Using remarkable new sources—including in-depth interviews with Jackie's sister, Lee Radziwell—Sarah Bradford has written a timely celebration of a life that was more private than commonly supposed. Jackie's privileged upbringing instilled rigid self-control while her expedient marriage into the overwhelming Kennedy clan consolidated her determination. Revealing new testimony from many of the couple's friends shows the profound complexities both of this apparently very public relationship and of her controversial marriage to Aristotle Onassis. Here is the private Jackie—neglected wife, vigilant mother, and working widow—whose contradictory and fascinating nature is illuminated by all that Bradford has discovered.