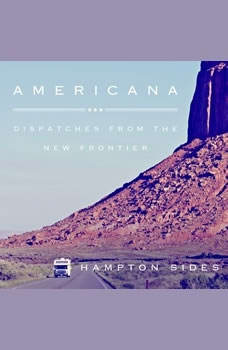 Americana: Dispatches from the New Frontier

For more than fifteen years, bestselling author and historian Hampton Sides has traveled widely across the continent exploring the America that lurks just behind the scrim of our mainstream culture. In these two dozen pieces, collected here for the first time, Sides gives us a fresh, alluring, and at times startling America brimming with fascinating subcultures and bizarre characters who could live nowhere else. Following Sides, we crash the redwood retreat of an apparent cabal of fabulously powerful military-industrialists, drop in on the Indy 500 of bass fishing, and join a giant techno-rave at the lip of the Grand Canyon. We meet a diverse gallery of American visionaries—from the impossibly perky founder of Tupperware to Indian radical Russell Means to skateboarding legend Tony Hawk. We retrace the route of the historic Bataan Death March with veterans from Sides's acclaimed World War II epic, Ghost Soldiers. Americana gives us a sparkling mosaic of our country today, in all its wild and poignant charm.