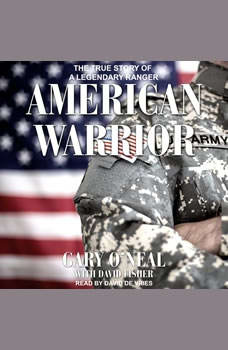 American Warrior: The True Story of a Legendary Ranger

The epic story of one of America's greatest soldiers, Ranger Hall of Fame member Gary O'Neal, who served his country for forty years

Chief Warrant Officer Gary O'Neal is no ordinary soldier. For nearly forty years, he has fought America's enemies, becoming one of the greatest Warriors this nation has ever known. Part Native American, O'Neal was trained in both military combat and the ways of his native people, combining his commitment to freedom with his respect for the enemy, his technical fighting skills with his fierce warrior spirit.

From his first tour in Vietnam at seventeen to fighting in both Gulf wars, O'Neal was nothing less than a super soldier. A minefield of aggression bordering on a justice-seeking vigilante, O'Neal kept fighting even when wounded, refusing to surrender in the face of nine serious injuries and being left more than once. O'Neal earned countless military honors as a member of the elite Army Rangers corps, a founding member of the legendary first Department of Defense antiterrorist team, a member of the Golden Knights Parachuting Team, and more, devoting his life to training the next generation of soldiers. His unbelievable true stories are both shocking and moving, a reminder of what it means to be a true American hero.

In O'Neal's own words, he "wasn't born a warrior"—life made him one. American Warrior will serve as inspiration for American men and women in uniform today, as well as appeal to the countless veterans who served their country alongside O'Neal.