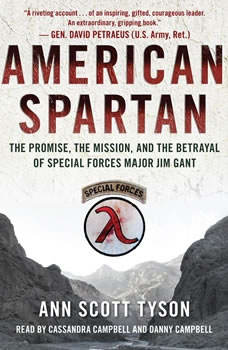 American Spartan: The Promise, the Mission, and the Betrayal of Special Forces Major Jim Gant

Lawrence of Arabia meets Sebastian Junger's War in this unique, incendiary, and dramatic true story of heroism and heartbreak in Afghanistan written by a Pulitzer Prize–nominated war correspondentSome have called him "Lawrence of Afghanistan." To the Pashtun tribesmen he is "Commander Jim," leader of the "bearded ones." He is Army Special Forces Major Jim Gant, one of the most charismatic and controversial U.S. commanders of modern memory, a man who changed the face of America's war in Afghanistan when his critical white paper, "One Tribe at a Time," went viral at the Pentagon, the White House, and on Capitol Hill in 2009.A decorated Green Beret who had spent years training indigenous fighters, Jim argued for embedding autonomous units with tribes across Afghanistan: these American soldiers would live among Afghans for extended periods, not only to train and equip tribal militias, but to fight—and even die—alongside them in battle. He argued that we could earn the trust of the Afghans and transform them into a reliable ally with whom we could defeat the Taliban and Al Qaeda networks. The military's top brass, including General David Petraeus, then commander of U.S. Central Command and overseeing the war in Afghanistan, and Admiral Eric Olson, head of Special Operations Command, approved the plan and gave Jim the go-ahead to embark on the mission.As correspondent Ann Scott Tyson got to know Jim Gant the man as well as the warrior, she saw that there was a larger story to tell—about a people desperate to defend their homes, and about this intense fighter and deeply honorable man who pushed boundaries, despite his own personal demons, and risked life and career to achieve what some thought was impossible. Ann soon came to share Jim's vision that Americans and Pashtuns could fight side-by-side and create real change across the region, so she accompanied him to Afghanistan, risking her life to embed with the tribes and chronicle their experience. This remarkable story—of Jim's close relationships with village elder Noor Afzhal and his family, the fierce fighting they took straight to the enemy in the treacherous mountains of Konar Province, and Ann and Jim's deepening love for each other—is told with a keen sense of drama and immediacy.A war story like no other, an unprecedented account of a warrior who took up the cause of villagers as if it were his own, and of a woman on the front lines of a distant war, American Spartan is an unforgettable tale—and one of the most remarkable and emotionally resonant narratives of war ever published.