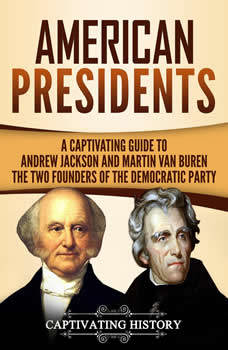 American Presidents: A Captivating Guide to Andrew Jackson and Martin Van Buren – The Two Founders of the Democratic Party

Explore the Lives and Relationship of the Two Founders of the Democratic Party!

When Jackson left the White House after two presidential terms, he had achieved a rare feat: he left office with even more popularity than when he first entered it. His reputation as a strong president and a “champion of working-class democracy” has nevertheless been viewed through a more nuanced lens in recent years.

The present day is thus an apt time for a look into Jackson’s divisive life and legacy and that is what this captivating book offers.

Some of the topics covered in part one of this audiobook include:

Some of the topics covered in part two of this audiobook include:

Scroll to the top and select the "add to cart" button to learn more about Andrew Jackson and Martin Van Buren!