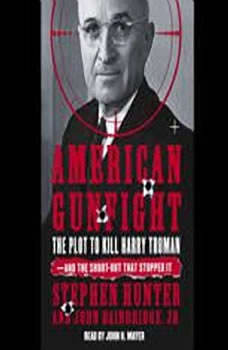 American Gunfight: The Plot to Kill Harry Truman and the Shoot-Out That Stopped It

AMERICAN GUNFIGHT is the fast-paced, definitive, and breathtakingly suspenseful account of an extraordinary historical event–the attempted assassination of President Harry Truman in November of 1950 by two Puerto Rican Nationalists and the bloody shoot-out in the streets of Washington, D.C., that saved the president's life.

Written by Pulitzer Prize-winner Stephen Hunter and John Bainbridge, Jr., an experienced journalist and lawyer, AMERICAN GUNFIGHT is at once a groundbreaking work of meticulous historical research and the vivid and dramatically told story of an act of terrorism that almost succeeded. They have pieced together, at last, the story of the conspiracy that nearly doomed the president and how a few good mean–ordinary guys who were willing to risk their lives in the line of duty–stopped it.

Hunter and Bainbridge are the first to report on the inner workings of this conspiracy; they examine the forces that led the perpetrators to conceive the plot. The authors also tell the story of men themselves, from their youth and the worlds in which they grew up to the women they loved and who loved them to the moment the gunfire erupted. Their telling commemorates heroism–the quiet commitment to duty that in some moments of crisis sees some people through an ordeal, even at the expense of their lives.