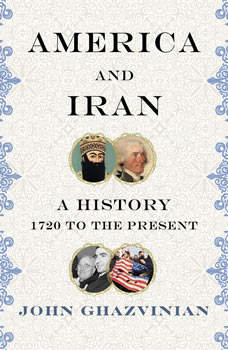 America and Iran: A Passionate Embrace, from 1720 to the Present

An important, urgently needed book--a hugely ambitious, illuminating portrait of the two-century long entwined history of Iran and America, the first book to examine in all its aspects, the rich and fraught relations between these two powers, once allies, now adversaries. By admired historian, author of Untapped: The Scramble for Africa's Oil ("he would do Graham Greene proud" --Kirkus Reviews).

In this rich, fascinating history, John Ghazvinian traces the complex story of the relations of these two powers back to the eighteenth-century's Persian Empire, the subject of great admiration of Thomas Jefferson and John Quincy Adams and for the Iranians, an America seen as an ideal to emulate for its own government.

Drawing on years of archival research both in the US and Iran--including access to Iranian government archives rarely available to western scholars--the Iranian-born, Oxford-educated historian leads us through the four seasons of US-Iran relations: the 'spring' of mutual fascination; the 'summer' of early interactions; the 'autumn' of close strategic ties; and the long, dark 'winter' of mutual hatred.

Ghazvinian, with grasp and a storyteller's ability, makes clear where, how, and when it all went wrong. And shows why two countries that once had such heartfelt admiration for each other became such committed enemies; showing us, as well, how it didn't have to turn out this way.