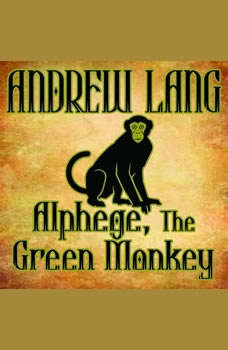 Alphege was born the son of a King, whose mother died in childbirth. His father mourned for several years, but eventually remarried to a beautiful, but evil, new queen who also bore him a child. The queen desired for her son to be the rightful heir, so from the very beginning she looked for ways to rid the kingdom of Alphege. Alphege was safe so long as he remained in his father's kingdom, thanks to the protection of his godmother. One day, however, Alphege goes on a journey to visit his aunt in a far-off land and as soon as he left his father's kingdom, an evil fairy cast a spell on him that turned him into a green monkey. His father, distraught over the loss of his son, soon dies and the queen's son becomes the new king. Years pass by until the kingdom discovers the truth of the green monkey that has appeared in the kingdom. Andrew Lang (1844-1912) was a Scottish writer who collected fairy and folk tales from various cultures and put them together in twelve volumes of tales. He was noted for taking the tales from as many original sources as possible, keeping the fairy tales close to their intended meanings.