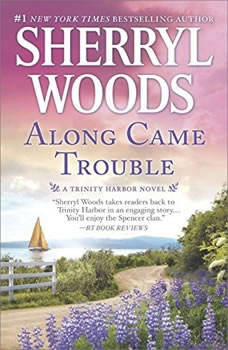 #1 New York Times bestselling author Sherryl Woods returns readers to the beloved Southern town of Trinity Harbor with a story of intrigue and second chances.Sheriff Tucker Spencer has seen some action…but finding an almost-naked woman asleep in his bed leaves him speechless. Especially because this same woman, Mary Elizabeth, broke Tucker's heart six years ago by marrying a charismatic Virginia politician, a man who's just been found shot dead.Mary Elizabeth needs Tucker's help. Needs him, period. But along with her return comes all the town gossip about their reunion romance. Even his father, who can't manage his own love life, is determined to "impart his wisdom" regarding theirs.Tucker's not listening to any of it. He just needs to clear Mary Elizabeth's name. But in the end, he'll confront a mystery even more confusing than murder: how the heart makes room for forgiveness and a new start.

It Must Be Love
by Rachel Gibson

Undercover cop Joe Shanahan's bad luck hit bottom the morning he stared up into the face of sexy suspect Gabrielle Breedlove. She'd blown his cover—brought him down with a can of hairspray—and now his new assignment was to pose ...

#1 New York Times bestselling author Nora Roberts presents the second novel of her In the Garden trilogy, as three women must discover the secrets from the past contained within their historic home.…A Harper has always lived at Harper House, t...

Flowers on Main
by Sherryl Woods

When her last two plays are dismal failures and her relationship with her temperamental mentor falls apart, writer Bree O’Brien abandons Chicago and the regional theater where she hoped to make a name for herself to return home. Opening Flower...

Returning home has never been so bittersweet in this acclaimed novel from #1 New York Times bestselling author Sherryl WoodsFlamingo Diner has always been a friendly place where everyone knows your name. Unfortunately, in the small town of Winter Co...

About That Man
Trinity Harbor #1