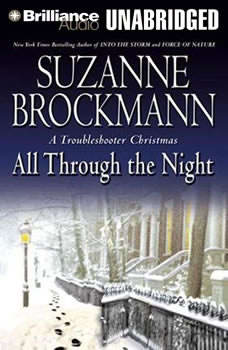 All Through the Night: A Troubleshooter Christmas

It’s Christmastime in Boston, and this year the silver bells will be wedding bells as FBI agent Jules Cassidy ties the knot with the man of his dreams, Hollywood heartthrob Robin Chadwick.The pair plan a quiet, intimate ceremony, to be witnessed by family and close friends from the FBI, SEAL Team Sixteen, and Troubleshooters, Incorporated, including Sam Starrett and Alyssa Locke. But the holiday season brings more to the happy couple than they expect.A waterfall coming through their kitchen ceiling, a bat colony in the attic, old family tensions…even an international incident can’t dampen their spirits. But add to that a parade of unexpected guests, including a reporter looking for a scoop, an ex-lover hell-bent on causing trouble, and a dangerous stalker, and suddenly the wedding is poised to unravel in chaos.But nothing will stop Jules and Robin from getting their happy ending, because along with a guest list featuring the most elite counterterrorism force in the world, they have their own secret weapon - true love.

I only listened to half of the first disc. This book is not not my cup of tea. I have read other books by this author and have enjoyed them. However this was not one of her better efforts as far as I was concerned

Before reading Suzanne Brockmann's Troubleshooter series I never would have believed I would enjoy a book about a male couple. I have a few friends that are gay but it's never been my interest or anything I thought I would care to read. When I started reading the Troubleshooter series I really enjoyed the characters of a lot of her couples. Also, after reading several books that had Jules as back character, I really started liking him. Even though I liked him, at that point I still didn't want to read about him in a relationship. But when I read Hot Target I found myself interested in the relationship between Jules and Robin. Then I read Force of Nature. I found myself looking forward to the next book about Jules and Robin. I thought this book was awesome! My only complaint was that all the Troubleshooter series books I've listened to are narrated by Patrick Lawlor. I ***ociate his voice with the Troubleshooters characters. All Through the Night is read by someone else. That was really disappointing to me. It really distracted me from the book. Whether you are gay or straight, the story is really good!

All Through the Night: A Troublesho...
Troubleshooters Series #12

Into the Fire
Troubleshooters Series #13