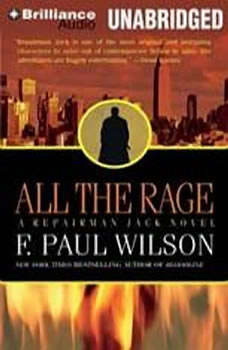 All the Rage: A Repairman Jack Novel

Can you imagine a new chemical compound, a non addictive designer drug that heightens your assertiveness, opens the door to your primal self, giving you an edge wherever you compete, whether on the street or the football field, in a classroom or a boardroom? Wouldn’t you be tempted to try it…just once? What happens if it releases uncontrollable rage and makes you a killer?“Wilson skillfully juggles subplots whose unpredictable collisions and complications further accelerate the relentless momentum of Jack’s labors.… A satisfying open-ended climax sets the stage for yet another chapter in Jack’s compelling saga.” —Publishers Weekly (starred review) on All the Rage