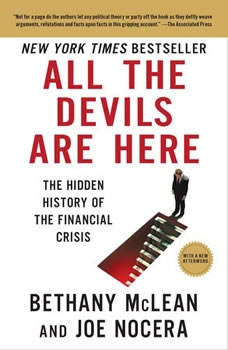 All the Devils Are Here: The Hidden History of the Financial Crisis

According to Bethany McLean and Joe Nocera, two of America's most acclaimed business journalists, the real answer is all of the above-and more. Many devils helped bring hell to the economy. And the full story, in all of its complexity and detail, is like the legend of the blind men and the elephant. Almost everyone has missed the big picture. Almost no one has put all the pieces together.

All the Devils Are Here goes back several decades to weave the hidden history of the financial crisis in a way no previous book has done. It explores the motivations of everyone from famous CEOs, cabinet secretaries, and politicians to anonymous lenders, borrowers, analysts, and Wall Street traders. It delves into the powerful American mythology of homeownership. And it proves that the crisis ultimately wasn't about finance at all; it was about human nature.

Adam Smith wrote that man has an intrinsic "propensity to truck, barter, and exchange one thing for another." But how did trade evolve to the point where we don't think twice about biting into an apple from the other side of the world? In A Splend...

Brilliant and engagingly written, Why Nations Fail answers the question that has stumped the experts for centuries: Why are some nations rich and others poor, divided by wealth and poverty, health and sickness, food and famine? Is it culture, the we...

The Smartest Guys in the Room
by Bethany McLean

Just as Watergate was the defining political story of its time, so Enron is the biggest business story of our time. And just as All the President's Men was the one Watergate book that gave readers the full story, with all the drama and nuance,...

The Wealth of Nations
by Adam Smith; edited by George Smith

An Inquiry into the Nature and Causes of the Wealth of Nations is one of the most important and influential works ever published on economic theory and is the foundation of classical economics. In it, Adam Smith stresses the importance of the divisi...

Before there was money, there was debt Every economics textbook says the same thing: Money was invented to replace onerous and complicated barter systems-to relieve ancient people from having to haul their goods to market. The problem with thi...

In this absorbing, smart, and accessible blend of economic and cultural history in the vein of the works of Michael Lewis and Andrew Ross Sorkin, a financial executive and CNBC contributor examines the five most significant stock market crashes in ...