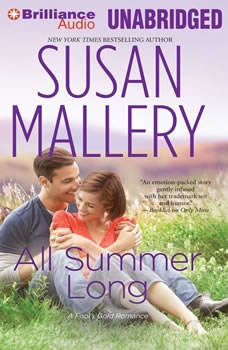 Former underwear model turned entrepreneur Clay Stryker has loved, tragically lost and vowed that he’ll never risk his heart again. After making his fortune, the youngest of the rugged Stryker brothers returns to Fool’s Gold, California, to put down roots on a ranch of his own. But he’s frustrated to discover that even in his hometown, people see him only for his world-famous…assets.Firefighter Chantal (Charlie) Dixon grew up an ugly duckling beside her delicately beautiful mother, a feeling reinforced long ago by a man who left soul-deep scars. Now she has good friends, a solid job and the itch to start a family — yet she can’t move toward the future while she’s haunted by painful memories.Clay finds an unexpected ally, and unexpected temptation, in tomboyish Charlie, the only person who sees beyond his dazzling good looks to the real man beneath. But when Charlie comes to him with an indecent proposal, will they be able to overcome their pasts and find a love that lasts beyond one incredible summer?

A classic heartwarming tale for the holidays from New York Times bestselling author Susan MalleryThe cheer in Fool's Gold, California, is bringing out the humbug in dancer Evie Stryker. An injury has forced her to return home to her estranged family...