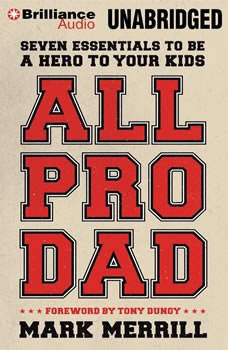 All Pro Dad: Seven Essentials to Be a Hero to Your Kids

Dads, do you want to be a hero to your kids? A go-to coach for your teens? A husband your wife knows she can count on? All Pro Dad lays out a game plan built on seven essential fathering truths and ultra-practical insights for the questions every dad needs answered at some point. Like football, fatherhood is about winning. But it’s more than just scoring points. It’s about winning the hearts and minds of your children and leaving a rich legacy of love for future generations.With gut-level “huddle” questions to ask your children and firsthand stories from well-recognized dads (CBS broadcaster James “JB” Brown, Chick-Fil-A founder and CEO S. Truett Cathy, Grammy Award–winning recording artist Michael W. Smith, FedEx Express COO and president, international, Michael Ducker, and more), All Pro Dad will stir you, equip you, and inspire you toward the goal of being a champion father and a hero to your kids.