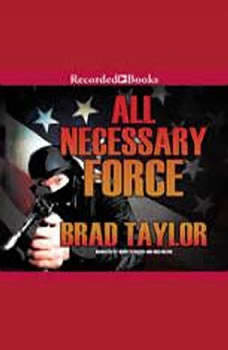 Best-selling author Brad Taylor draws upon his own experiences as a Delta Force commander for his exciting series starring elite Taskforce operative Pike Logan. In All Necessary Force, Logan and his partner Jennifer Cahill are trailing two terrorist organizations from Asia to Egypt when a deadly threat arrives in the U.S. Narrators: Henry Strozier, Rich Orlow

From Shanghai to Wake Island, the Corps was America’s first line of defense as the winds of war exploded into the devastating surprise attack on Pearl Harbor.This is the story of the men of the Marine Corps, their loves and loyalties, an elite...

The Navy SEALs have been fighting terrorists around the world for more than a decade. And for all that time, the Bandito Platoon from SEAL Team Seven has been on continuous combat rotation. Now they have drawn a shipboard assignment off Central Amer...

An incredible publishing story-written over the course of thirty years by a highly decorated Vietnam veteran, a New York Times bestseller for sixteen weeks, a National Indie Next, and a USA Today bestseller-Matterhorn has been hailed as a "brilliant...

The Navy SEALs have been fighting terrorists around the world for more than a decade. And for all that time, the Bandito Platoon from SEAL Team Seven has been on continuous combat rotation. Now they have drawn a shipboard assignment off Central Amer...

Behind the Lines
by W.E.B. Griffin

Behind the Lines is W. E. B. Griffin's powerful novel of World War II -- and the courage, patriotism, and sacrifice of those who fought it.By 1942, the Japanese have routed the outnumbered American forces and conquered the Philippines. But deep in t...

It's 1942. A Marine aviator, an Army paratrooper and demolitions expert, and a non-com radio man are on an impossible mission for the OSS—sabotaging the resupply of German ships and submarines—by any means necessary!First Lieutenant Clet...

Winchester Remington Smith is a crack shot. Problem is, surrounded by roller coasters and merry-go-rounds, his talent is going to waste, knocking down ducks in a carnival shooting gallery. Win wants some real action, and like Gary Cooper as Sergeant...

One Rough Man
by Brad Taylor

A former Delta Force commander, Brad Taylor proves with this breathtaking debut thriller that Vince Flynn and Brad Thor have company. A collection of top operatives, the Taskforce was commissioned by the highest levels of government, kept secret fr...

Featured title on PBS's The Great American Read in 2018The #1 New York Times bestseller that launched the phenomenal career of Tom Clancy—a gripping military thriller that introduced the world to his unforgettable hero, Jack Ryan.Somewhere und...