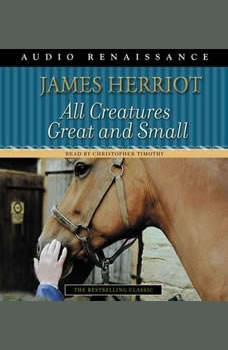 All Creatures Great and Small

Series: All Creatures Great and Small

These are the stories that catapulted James Herriot to literary fame. When this book was first published, it was merely a simple volume of memoirs by an unknown Scottish veterinarian. But within a year, the book became recognized as a masterpiece. And in the three decades that followed, Dr. Herriot has become one of the most universally loved authors of our time.In this first volume of memoirs, then-newly-qualified vet James Herriot arrives in the small Yorkshire village of Darrowby and he has no idea what to expect. How will he get on with his new boss? With the local farmers? And what will the animals think? This program is filled with hilarious and touching tales of the unpredictable Sigfriend Farnon, Sigfreid's zany brother, Tristan, and Herriot's first encounters with a beautiful girl called Helen.Now as then, All Creatures Great and Small is full of humor, warmth, pathos, drama, and James Herriot's love of life. His journey across the Yorkshire dales, and his encounters with humans and dogs, cows, and kittens are lovingly told by Christopher Timothy with all the fascination, affection, and joy that suffuses Dr. Herriot's work.

Even as a young girl, growing up in the Bronx, Mary Higgins Clark knew she wanted to be a writer, The gift of storytelling was a part of her Irish ancestry, so it followed naturally that she would later use her sharp eye, keen intelligence, and inqu...

Hang on for the ride: with characteristic poetry and pluck, Barbara Kingsolver and her family sweep readers along on their journey away from the industrial-food pipeline to a rural life in which they vow to buy only food raised in their own neighbo...

All Creatures Great and Small Bundle

All Things Bright and Beautiful
All Creatures Great and Small

All Things Wise and Wonderful
All Creatures Great and Small