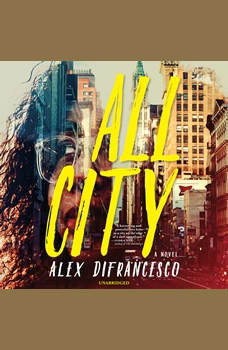 In a near-future New York City in which both global warming and a tremendous economic divide are making the city unlivable for many, a huge superstorm hits, leaving behind only those who had nowhere else to go and no way to get out. Makayla is a twenty-four-year-old woman who works at the convenience store chain that's taken over the city. Jesse, an eighteen-year-old, genderqueer, anarchist punk lives in an abandoned IRT station in the Bronx. Their paths cross in the aftermath of the storm when they, along with others devastated by the loss of their homes, carve out a small sanctuary in an abandoned luxury condo. In an attempt to bring hope to those who feel forsaken, an unnamed, mysterious street artist begins graffitiing colorful murals along the sides of buildings. But the castaways of the storm aren't the only ones who find beauty in the art. When the media begins broadcasting the emergence of the murals and one appears on the building Makayla, Jesse, and their friends are living in, it is only a matter of time before those who own the building come back to claim what is theirs. All City is more than a novel, it's a foreshadowing of the world to come.

Shelter for Now
by Bob Howard