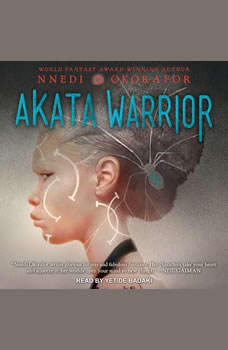 A year ago, Sunny Nwazue, an American-born girl Nigerian girl, was inducted into the secret Leopard Society. As she began to develop her magical powers, Sunny learned that she had been chosen to lead a dangerous mission to avert an apocalypse, brought about by the terrifying masquerade, Ekwensu. Now, stronger, feistier, and a bit older, Sunny is studying with her mentor Sugar Cream and struggling to unlock the secrets in her strange Nsibidi book. Eventually, Sunny knows she must confront her destiny. With the support of her Leopard Society friends, Orlu, Chichi, and Sasha, and of her spirit face, Anyanwu, she will travel through worlds both visible and invisible to the mysterious town of Osisi, where she will fight a climactic battle to save humanity. Much-honored Nnedi Okorafor, winner of the Hugo, Nebula, and World Fantasy awards, merges today's Nigeria with a unique world she creates. Akata Warrior blends mythology, fantasy, history, and magic into a compelling tale that will keep listeners spellbound.

"A brilliant debut, full of everything I love: a sparkling and fully realized heroine, an intricate and deadly system of magic, and a searing romance that kept me reading long into the night. Serpent & Dove is an absolute gem of a book." —...

It is 1659 and Mary Newbury, theyoung granddaughter of a witch, sees her wise and beloved grandmother tortured and hanged as a servant of the Devil. Then a stranger with hauntingly familiar eyes approaches her with an opportunity–safe passage...

The Shepherd's Crown
by Terry Pratchett

ALA Best Fiction for Young Adults * ALA Booklist Editors' Choice * ALA Notable Children's Book“Pratchett’s unique blend of comedy and articulate insight is at its vibrant best. Full of rich humor, wisdom, and eventfulness.” —...

I Shall Wear Midnight
by Terry Pratchett

It starts with whispers. Then someone picks up a stone. Finally, the fires begin.When people turn on witches, the innocents suffer. . . . Tiffany Aching has spent years studying with senior witches, and now she is on her own. As the witch of the Ch...

Poor Princess Anya. Forced to live with her evil stepmother's new husband, her evil stepstepfather. Plagued with an unfortunate ability to break curses with a magic-assisted kiss. And forced to go on the run when her stepstepfather decides to make t...