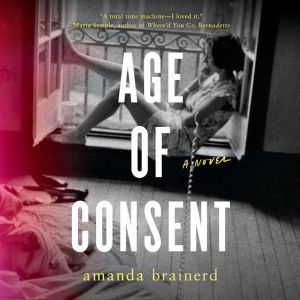 Age of Consent: A Novel

Named One of the Best Books of the Summer by Good Morning America, Cosmopolitan, Harper's Bazaar, and PopSugar

It's 1983. David Bowie reigns supreme, and downtown Manhattan has never been cooler. But Justine and Eve are stuck at Griswold Academy, a Connecticut boarding school. Griswold is a far cry from Justine's bohemian life in New Haven, where her parents run a theater and struggle to pay the bills. Eve, the sophisticated daughter of status-obsessed Park Avenue parents, also feels like an outsider amidst Griswold's preppy jocks and debutantes. Justine longs for Eve's privilege, and Eve for Justine's sexual confidence. Despite their differences, they form a deep friendship, together grappling with drugs, alcohol, ill-fated crushes, and predatory male teachers.

After a tumultuous school year, Eve and Justine spend the summer in New York City where they join Eve's childhood friend India. Justine moves into India's Hell's Kitchen apartment and is pulled further into her friends' glamorous lives. Eve, under her parents' ever-watchful eye, interns at a SoHo art gallery and navigates the unpredictable whims of her boss. India struggles to resist the advances of a famous artist represented by the gallery. All three are affected by their sexual relationships with older men and the power adults hold over them, even as the young women begin to assert their independence.