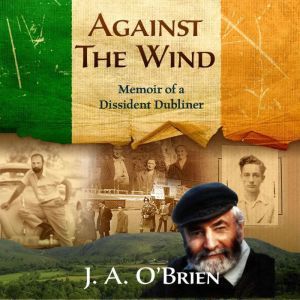 Against the Wind: Memoir of a Dissident Dubliner: N/A

Set in Dublin during the years of the Second World

War and in England during the post-war years of

spirit who refuses to accept the constraints and strictures of a

closed Irish society. And who through economic necessity, at a very

young age, is forced to live and work in ‘Pagan England’ the land

of ‘the enemy’. There he learns to ‘like the English’ and learns of

‘freedoms that he knew very little about’ in ‘holy Ireland’.

A wealth of varying and informative material and the ability to

anchor the personal securely within the public domain gives this

The narrative has all the ingredients for a compelling read –vivid

and varied characters brought alive on the page, compelling setting

and historical relevance and interest. The prologue whets our

appetite for what is to come and the mixture of recollection, poetry

and historical information drawstrings the narrative together well.

Astute observation and character portrayal are the strengths of the

work, as is the accessible tone of the narrative voice in which the

author employs a light touch that has just the right amount of wit and sobriety.